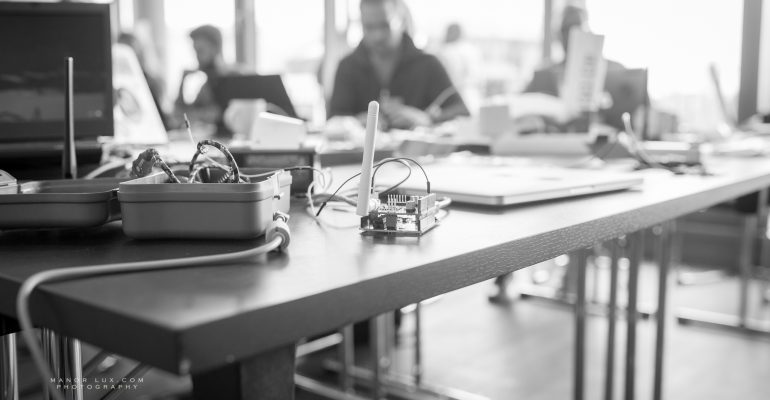 At the end of March 2017, I participated in an IoT Makerthon (Hackathon) at my co-working space in Cologne.

The turnout was not what I expected, we were only approx. 15 participants. Considering it was planned on a Monday in working hours the only people who could attend were those who were either sent by their day job or those who could take the day off.

After a quick round of introductions, we started brainstorming on what ideas we wanted to implement. Everyone got one vote and those with the most votes would be worked on by the groups.  I’ll talk more about the projects later on.

Before breaking into projects, we had some jumpstart sessions with both sponsors to get their platforms and their capabilities:

Then we broke into teams and started working on the projects. Here are the results that were achieved:

Bridge Measurement: In MediaPark there is a bridge, and we thought it would be cool to be able to measure its usage by means of its movement. So based on the readings of the accelerometer on the calliope-mini, we did just that. Movements were sent via LoRa to the the things network which then can be used for further processing or consumption by someone else. For predictive maintenance.

Air Quality: For the open space rooms in Startplatz it is good to have a friendly reminder to open the windows now and then to provide fresh air. So by connecting Seeed Grove Air Quality Sensor to the calliope-mini we managed to find an appropriate quality value to send a visual and auditive reminder.

Foosball Table (Kickertisch): We have a great (professional) Foosball table at Startplatz. We decided it would be useful to be able to monitor when it was in use, call for additional players and for a quick tournament. Using a couple of calliope-mini’s, we setup the first to measure movement on the table. When use is detected it sends a message using BLE to a second calliope (used as a digital board) to signal that the table is busy. By pressing the buttons on the first device signals are sent to call for players or a quick tournament. Of course we had to connect to the things network and based on that info tweet the information on the board, using node-red. The code to this can be found here.

Monitor walk-in meeting rooms: we have walk-in meeting rooms, that cannot be booked and should only be used for max. 1 hour. Some members overstay their welcome in these rooms so we setup the QLOUD box with a sensor for the door, a movement sensor, and a siren. With that we can give the member a kind reminder that is time’s up. This all feeds to their IoT backend to create statistics and be able to see it on a dashboard.

I for one, think it was a great day. I got to know lots of interessting people, got my hands on new technology and even got a starter kit from QLOUD (Thanks again to Christian and Daniel)

The session was followed by a TV crew. There is condensed video in the ZDF Mediathek in German. It starts at 9:50 and ends on 14:45

Before I close this article, I would like to reflect on how much prototyping can be done with these inexpensive kits. Especially if you consider that no one had to do much programming in any language, but rather drag-and-drop.