I’m impressed how some software Vendor have resisted to provide support for Red Hat Enterprise Linux 6 (RHEL6) and its derivates for their products. This week I ran into two examples:

a. Nexpose from Rapid7:
This is a Vulnerability scanner, which does a good job at what it does, even in the Community Edition. Actually it lets you scan up to 32 machines without restricting the plug-ins.
If you look at the requirements in their site you’ll find the following: 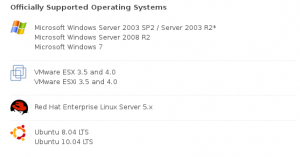 I don’t expect support for Ubuntu 12.04 which was released a couple of weeks ago but I would think that RHEL 6 would be supported, especially since its release date was more than 13 months ago (2010-11-10).  It is very probable that a company building a new infrastructure (like in my case) would use the latest enterprise release and not one that is 5 years old, even if it will be supported for 5-8 years more.

To make matters worse, if you try to install on RHEL clones or derivates like  CentOS and Scientific Linux the installer says that they are not supported.

Workaroud: change the contents of the /etc/redhat-release during the installation process to the one used by RHEL.

b. Zenoss from Zenoss, Inc

This is an Open Core monitoring system, which one could compare with Nagios + Cacti or commercial tools like HP OpenView.
I couldn’t find a requirements sheet on the commercial website but on the community edition there is support for a wide range of OSes  and Linux distributions, again not including RHEL 6. 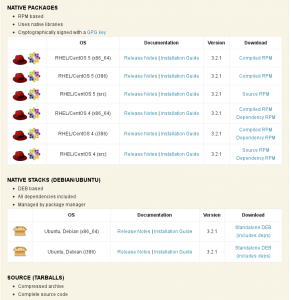 On the plus side it does offer support for CentOS (I would assume other RHEL clones) and its open core, so you can download the sources and build it yourself if you want to.

I’m wondering what other reason, besides cutting costs, would these vendors have for not supporting RHEL6.
Could it be the penetration rate or the market?  I’m going to see if I can find more information regarding this and publish an update afterwards.  Maybe I’ll even get a straight answer from the vendors themselves.